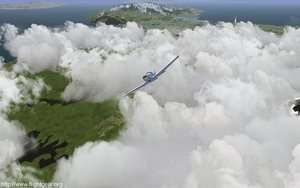 Warning: FlightGear has a low trust rating among users. Caution is urged when contemplating installing this program.

A review of FlightGear by Sven Sørensen

FlightGear is a flight simulator with support for multiple platforms such as Windows and Mac. It was developed as collaborative software project and all of the source code of the application it open for anybody to contribute to and make derivatives from.

The purpose of FlightGear is to create a sophisticated flight environment with realistic conditions. It is suitable as not only entertainment, but also for every type of aviation enthusiast. FlightGear may also be used in research conditions.

FlightGear includes various aircraft models and an extensive and detailed database of venues around the world. As with any sophisticated simulation program, getting used to the controls may take a while.

With that said, there are tons of different aircraft models available for download from the project web site.

This download is licensed as freeware for the Windows (32-bit and 64-bit) operating system on a laptop or desktop PC from simulation games without restrictions. FlightGear 2020.1.3 is available to all software users as a free download for Windows 10 PCs but also without a hitch on Windows 7 and Windows 8.

Compatibility with this aircraft simulation software may vary, but will generally run fine under Microsoft Windows 10, Windows 8, Windows 8.1, Windows 7, Windows Vista and Windows XP on either a 32-bit or 64-bit setup. A separate x64 version of FlightGear may be available from Curtis L.